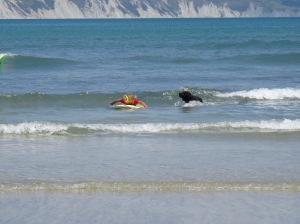 Louis can be quite… exuberant. When he decides he wants to do something not much will dissuade him nor alter his straight-line path to his goal. I keep pivoting away from exasperation at his determination towards celebration of it. Sometimes all this pivoting leaves me a dizzy, crumpled mess on the floor. Somedays, I pirouette like Fancy Nancy.

One of the things it was really important to me to bring along on our travels this summer was a surf board. A lifetime ago I surfed with boyfriends and friends, using boards they had lying around, and since then I’ve had a couple of stints in various places around the world but I’m not really a surfer. I’d love to be though, so this summer I wanted to bring a surfboard along.

So, about 10 days into our trip, we were skimming the coast on our way to Mahia. The surf was gigantic, and there was a pod of about 20 surfers sitting off the coast catching the waves. We pulled over to watch them and Louis kept asking me, “Mama!! Can we get out and surf?!! Can we? CAN WE????” These waves were ginormous. Louis had spent exactly 20 minutes on a board at this point. And I just kept saying, “No, they’re huge!!” But he didn’t really get it and thought his mother was just being a curmudgeon.

I hate being the ‘No-Mama’ and most of the time do my best to avoid it. But sometimes I fall into old habits and we find ourselves grumpy and snipey and generally disconnected.  I really wanted to break free of it and sensed that surfing was going to help us.

A while ago I read an article about gamification in education (and I just spent about 20 mins trying to find it on the internet but couldn’t, so I’m sorry there’s no link) and what it said was instead of grades – which don’t really have any meaning for children – being able to progress to the next level is extremely motivating. I managed to remember this, and decided I was going to implement it with the surfing.

Luckily, the waves where we eventually camped in Mahia were tiny and perfectly formed, so we went down to the water and I said, “Now, there are different levels to surfing, and you can’t just go skipping straight to Level 5. You’ve got to start at Level 1, and then when you’ve completed that level, you go up to the next one.” He was immediately engaged, “Right, so what’s Level One?” I had to quickly think of something, “Catching a wave” I said. “And what’s the next level?” “Standing up” And off we went. He was totally into it, and is still taking it very seriously. Level 3 was catching a wave and standing up by himself, and Level 4 is catching a wave before it breaks (up until now he’s been mostly doing this in the white wash). Level Four’s what he’s working on at the moment.

He is totally rocking the surfing, and because he’s so freaking goal oriented the “levels” are perfect. He’s getting a feel for what sized wave he’s comfortable with, he’s enjoying the challenge of doing something that he can’t quite get yet but has the sense he will eventually – soon. He’s managing himself and his expectations, and we’re both really enjoying it. I’ve stopped being Boring Say No All The Time Don’t Let Me Do Anything Mama and all of a sudden we’re on the same team again.

That’s a really nice place to be.

From: Camper Van Adventures, Unschooling Theory
← Back before I had kids, when I knew a lot about having kids.
Camping Smells →
No comments yet